In her business and private practice, Julia applies her understanding and feeling for Process Work/deep democracy in coaching and facilitating leaders, their co-workers and teams, working mainly in residential care communities, health and education. Process Work coaching assumes that in life’s events, joys and difficulties we move through various experiences in our internal world, the world we perceive around us, and the larger social and societal forces we are born into and that shape our experience of being here. These experiences although seemingly fragmented in the hustle and bustle of daily pressures, can also be discovered as meaningfully connected. Process Work views experience as a multi-faceted information field with observable signals and patterns that you can train yourself to notice and apply specific skills to, to make it easier to deal with the complex often opposing viewpoints and directions that pull at us and take us to the edge of our personalities, circumstances beyond our control and coping mechanisms. Here’s a clip from Julia’s YouTube channel addressiing one of these experiences – called the “edge”:

Her experiences across the global north and south in local communities, NGOs, and government organisations spans 40 years.  Julia first learned about Process Work when part of a leadership team in a social care organisation in South Africa in the 1990s, serving people with diverse abilities and states of mind.  Nelson Mandela had just been released from prison.  Her facilitation skills were no match for the intensity of conflict that broke out among colleagues.

A friend gave her a book by Arnold Mindell, Leader as a Martial Artist.  Here she found a language for her experiences, and a way to discover within the impossible, inherent beauty and direction in a meaningful non-pathologizing way.

Julia later recognised how the experience of dismantling inner and outer apartheid in herself and the organisation mirrored the changes in this transforming ‘rainbow nation’ as Mandela coined it.

The experience awoke her inner quest to study and follow Mindell’s view of process as an innate direction, combining a reliable intrinsic pattern with an intentional pragmatism and a welcoming attitude towards unintentional stumbles and surprises as learning guides.

Process Work has given me a palette of awareness tools to use personally and in my work, as mirrors of each other: To create a sense of home on the inside and outside, a survival kit for low power emotions and triggers, and to find a way forward with more wholeness in polarising situations.

Julia studied Process Work facilitation, leadership, coaching and conflict work with the international Deep Democracy Institute (DDI), a travelling school with regional hubs in global hotspots, co-founded by Ellen and Max Schupbach. She continues to study and work with a vibrant community of fellow learners and teachers around the world. 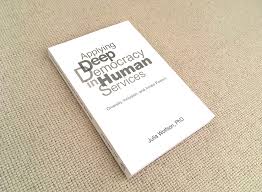 Julia shares lessons from her international experiences as a coach and facilitator through the lens of her Process Work studies, in her book “Applying Deep Democracy in Human Services: Diversity, Inclusion and Innate Powers.” 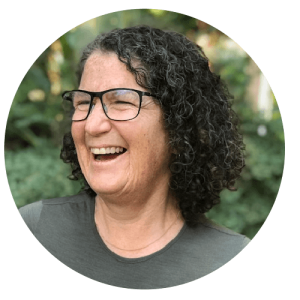